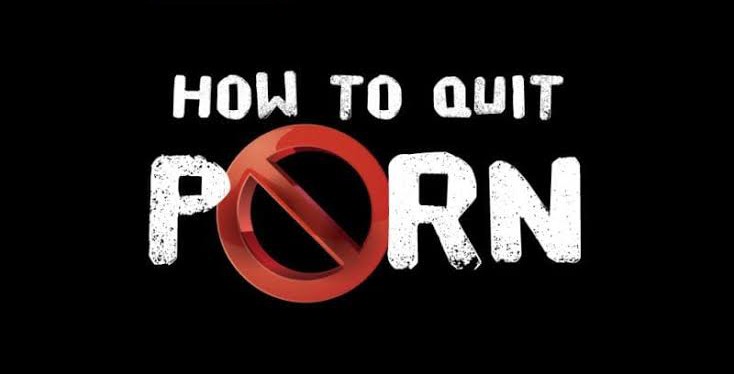 This post is for all mankind, but some terms are centred mostly on Muslims, I believe other faiths would benefit from it too. Happy Reading…

The former, however, has been found to induce the latter. But one thing clear is that the root cause of both is related to sexual appetite and gratification.

However, a relevant fact about the acts is that both are (oftentimes) done secretly by a person, two or a group. The last ounce of shame in people is the reason they don’t engage in the act(s) openly.

This, however, can only continue in private as long as the doer(s) has/have a little shame and they are sane.

The first step of any significant endeavour starts with a genuine decision to undertake it. This step can’t be taken on your behalf. It’s only you who can make it. And it’s only you who can let people know of it. Letting them know doesn’t require you to tell them. They will see that through the changes they’ll observe in you, later on, inshā Allah.

The decision to quit requires an honest intention taken and contracted between yourself and you. It also requires an action taken to demonstrate and translate that decision.

2. Tell Allah You’ve Decided to Quit Pornography and Be Honest

Allah knows all we do, no doubt. However, when we decide to seriously engage in works that invite His pleasure, we need to confess and admit to our wrongdoings before Him.

This confession supports us to seek His guidance, and hence, to repent, seek forgiveness and show steadfastness in our future records. Confession is not to free one self from the sense of guilt, and then consider the sinful acts as norms and acceptable.

Confession is to acknowledge to Allah His Highness, and our need for Him. By confessing to Allah and seeking guidance and repentance from Him, we’re starting a new chapter with Him.

We want our new chapter to be full of inspirations, and productivity in a way that will entitle us to His closeness, and ultimate pleasure.

A sincere repenting heart will always take you closer to Allah and away from all evil. Sincere repentance will make you among the righteous and will turn your bad deeds into good deeds.

4. Surround Yourself With A Good Company

The company you keep matters. The people who are in your life and how much you let them influence you matters. Hence, if your repent sincerely and people around you encourage evil, leave them. Surround yourself with the ones that will remind you of your Creator, Allah.

5. Dissociate yourself from things that encourages Pornography

In today’s world, many things promote and encourage pornography. Watch out before you read a new book, or watch a new movie.

We would suggest that you review four things in your life;

By upholding the correct belief, instilling strong morals and values in oneself and inculcating them in your family members and friends.

6. Be Wary Of Social Media – Too Much Addiction

Addiction to social media is alike of everything else’s, if not more. It’s best if one can limit the use to as much as necessary.

Avoid too much and unnecessary exchanges with the opposite gender on the Internet. Endeavour to put the social media into beneficial use by using it to spread knowledge and appropriate admonitions and likewise as a tool for learning.

A poet has written some lines as regards the Internet.

“I hate the Internet so much that I got tired of it And my reasons for this hatred are many From it is because it’s a deep ocean How many times has it taken away (my) time.”

A poem on the dangers of the internet by Muqbil Ahmad.

In a Quran verse, Allah says, “Every soul shall taste death: And only on the Day of Judgment shall you be paid your full recompense”

Remembrance of death engenders piety which consequently helps you to abstain from major sins because the first thing you think of is what if you die while disobeying Allah, doing that which you’ve been prohibited from.

And you know you’ll be resurrected the same way you died. And you know it would be unbefitting to die in such a manner.