HOW TO PREPARE THE NIGERIAN POPULAR VEGETABLE SOUP (Edikang Ikong) 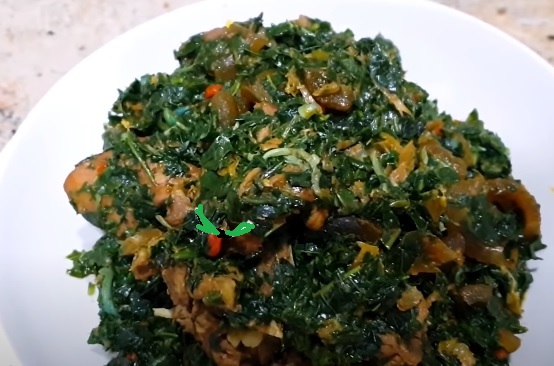 Cooking is a great skill that everyone would love to have especially coking of native soups. Nigerian soups come in varieties of taste and present different options to choose from. From vegetable soup, Ogbono soup, Egusi soup, Nsala soup, groundnut soup, to bitter-leaf soup and lots more.

Learning how to cook any of the soap and becoming perfect in doing it can be a bonus to your cooking skill and helps you to cook it just the way you like it.

WHAT IS A VEGETABLE SOUP?

In the literal term, vegetable soup could mean any soup prepared with vegetable or vegetables only. The definition is not far from what we have here.

Nigerian Vegetable soup is a popular soup in the southern part of Nigeria especially the one prepared with water leaves, pumpkin leaves, and Ukazi leave. This type is popularly known as ‘Edikang Ikong’ soup within the Calabar and Akwa-Ibom environs.

This soup is so nutritious and delicious that almost all the busy restaurant sells it because of its high demand. Despite the fact that it is costlier than other types of soup not because of the high demand but because of its rich values and costly ingredients use in preparing it especially the meats, fishes, and varieties of vegetables.

Normally, some areas in Nigeria can prepare vegetable soup without adding all the listed ingredients here because that is their own brand of vegetable soup but the one of Calabar and its environs beats every other rival and happens to become the most wanted and served in all public restaurants.

We are going to discuss how the famous vegetable can be prepared. Even if do not have any knowledge of it before now.

The ingredients you need to prepare Edikang Ikong vegetable soup:

Onions and other cooking ingredients

Periwinkles with its shell

Wash the fresh red meat with clean water and cut according to the size you want. Put it into the pot and start steaming it. Add sliced onions, grinded pepper, a cube of Maggi, and salt.

While the meat is on the stove, bring out the cowskin meat (kpomo) and slice it into small pieces alongside with the shaky. Wash everything with clean water and small salt.

Cut the stockfish into the size you want and wash properly with clean water. Then keep it together with the cowskin meat you have prepared.

Wash the pumpkin leave first with salt and clean water and slice it into the size you want then keep in a separate bowl.

Wash the waterleaf separate with salt and clean water and then slice into small sizes you prefer. Then keep it in a separate bowl.

If the Ukazi leaves have not been sliced already from the market (usually sliced in the market), you can proceed and slice it. Some people even pound the Ukazi leave with mortar and pestle to reduce the size further. Ukazi leave will help to put a nice feeling in the soup while eating it and reduce the slippery effects from waterleaves which some people don’t like. The quantity of Ukazi leave you to add in the soup will determine how sharp and less slippery the soup will be in the mouth. To get its best effect, you can grind it further into powder form by pounding it with mortar and pestle.

Wash the periwinkle you have bought separately and keep in a separate bow.

Slice the number of onions you want to use and get everything ready. Before now, the red meat you placed on the stove supposed to be ready. Bring it down and start boiling the sliced cowskin meat and shaky with the stockfish separately with a different pot or by pouring the red meat water in a bow before starting the cooking of the stockfish, cowskin meat and the shaky.

While cooking the cowskin meat, shaky and stockfish, add salt, pepper, one cube of Maggi, sliced onions and any meat flavouring ingredient you have. You are supposed to be doing this while still slicing the vegetables leaves or doing other things.

Assuming everything is now ready and you have brought down the stockfish and the sliced cowskin and shay meats, filter out its water into the pot you want to use for the cooking of the soup. Add the water you obtained from the red meat you cooked earlier. The water will become your main water for the soup.

Place the water on your stove and proceed to add all the necessary ingredients without adding the periwinkle, and the vegetables. Add the meats and stockfish as well. Add enough red oil as well.

If the water level is not enough adding more water to it. And allow it to start boiling. Please note, that this soup doesn’t use much water because the vegetables you will add later have water to add into the soup. Therefore, a cup of water in the pot may be enough to handle the whole soup ingredients because the soup doesn’t use a thickener. It thickens naturally from the dominant vegetables, meats, fishes and periwinkles in it.

How to prepare Vegetable soup: At the last stage before serving it

Once the water starts boiling add the pumpkin leaves first and the Ukazi leaves then start stirring everything together until the leaves, meats, stockfish blends together. Then add periwinkle and continue the turning (stirring) until the periwinkle blends with the ingredients in the pot. Just a few minutes to bring down the soup from the stove, pour the sliced waterleaf into the pot and start turning it until it blends with the rest ingredients in the pot. The moment you add the waterleaf you will notice a slight increase in the water level in the pot. This is where most people make mistake, if the water already in the pot is more than enough, the soup becomes watery the moment you add the waterleaf. Such will not give you the best feel of the vegetable soup and may cause you to allow it to dry water by heating it further thereby reducing the supposed freshness of the vegetables because the vegetables don’t require too much heating.

Sometimes sharp sand may be seen while eating the soup especially when you use the periwinkles that has their shells in it. Lack of proper washing of such periwinkles, cowskin meats, and the vegetables could contribute to such error. Therefore, wash everything thoroughly and separately with clean water and salt before adding into the soup.

Take accurate calculation of the water level by using the smallest quantity possible rather than having excess water in the soup after cooking.

Do not soak any of the vegetables inside water before or after slicing it. It weakens the vegetable and makes it very soft in the soup.

Ensure you cooked the fresh meats, cowskin and stockfish separately as mentioned in the step. This will enable them to produce their own taste and reduce the time of cooking the vegetables at the last stage.