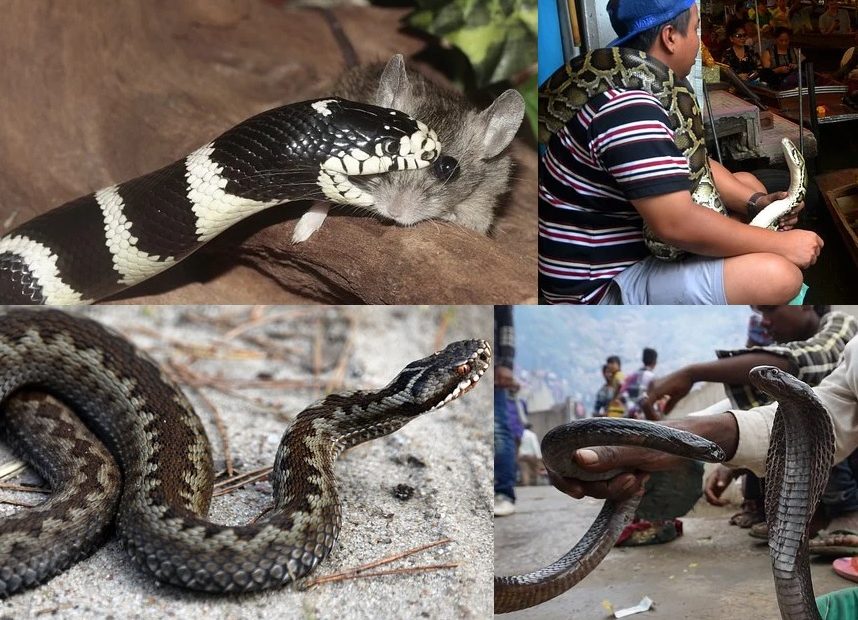 We all know how terrible and serious snake bites could be. That’s said, it should be stated that not all snakes are venomous. While African snakes such as Mamba and Cobra and very venomous most European snakes are not. However, it is best not to pick any up or play with them be it of African, European or South American descent. If someone has been bitten by a snake, it is important to determine whether that snake is venomous.

The most common venomous snake in Europe is the viper, which rarely exceeds 60 centimeters in length and has a broad head that protrudes clearly from the trunk. The tip of the muzzle is flattened and the colour varies from gray to brownish red and can even be almost black. There is a striking zig-zag drawing on the back. At the front of the mouth are two erectable teeth that inject the venom. The bite is rarely fatal.

Many venomous snakes belong to the genus of pit vipers (Crotalidae), which, as the name suggests, is characterized by a groove between the nostrils and the elliptical eyes. The head is triangular and also clearly distinguishes itself from the body. This species includes, for example, the rattlesnakes.

If the snake was not venomous, rinse the bite thoroughly and bandage the wound. In general, such a snake bite is more frightening than dangerous. However, if you suspect the bite is from a venomous snake, follow these directions:

After the bite, stay as calm and still as possible. Lie quietly and, if possible, keep the bitten area lower than the heart . This position restricts the flow of the poison.

If the area around the bite changes colour, starts to swell, or starts to hurt, the snake was probably venomous. If the arm or leg has been bitten, make a tight bandage (between the bite and the heart) about 5 centimeters above the bite. This ensures that the transport of the poison is slower.

The bandage should be tight enough to slow blood flow just under the skin, but not so tight that blood circulation in the arm or leg stops completely. Do not remove this bandage; the doctor does.

If the bite happened within the last 15 minutes and you are sure it was a venomous snake, but you can’t be in a hospital in two hours , use a sterile razor or other knife to make a half-inch-deep cut through each of the fangs impressions. Make sure those cuts run the length of the leg or arm (and not the transverse direction).

Then suck the poison out of the wound with a suitable tool (a tube), but do not do this directly with the mouth. The poison can then be absorbed through the mucous membranes , causing swelling in the mouth! Provide emergency medical assistance.

Fainting can potentially be a serious phenomenon, but in most cases it remains quite harmless. However, if you see someone pass out, you should be very attentive: loss of consciousness can lead to injuries or complications. Anyone who falls badly on a hard surface can even break his bones. Dizziness and vertigo are already a bad sign and indicate a blood circulation problem.

What should you do if someone faints and how can you help the victim? In a nutshell, it comes down to promoting both the victim’s breathing and blood circulation. In addition, it is best to follow a step-by-step plan to act quickly and effectively when you see someone pass out. Which step-by-step plan is that and which tips should you take into account if you see someone become unconscious and fall to the ground?

Fainting has to do with reduced blood flow to the brain that causes the person to lose control of their body and can injure themselves. If you see someone fainting, it is very important to help them as best you can. If possible, try to catch the victim to avoid injuries. After fainting, blood circulation should be improved again as soon as possible. Here are some tips and a step-by-step plan to follow when you see someone pass out.

Fainting can be very temporary or very mild, but it can also last longer. Therefore, immediately check whether the victim can hear you. For example, say his name and ask if he hears you. Provoke a response and if you don’t get it, you know the victim is unconscious.

Chest up and down?

Victim is not breathing

If he is not breathing, CPR, especially cardiopulmonary massage, should be started immediately. This is a combination of mouth-to-mouth resuscitation and heart massage.

If the victim is still breathing, proceed to the next step.

If the victim is still breathing, try to get the blood circulation going as quickly as possible . This is aided by placing the victim’s legs higher than the rest of the body. This makes the blood go faster to the heart and brain and the victim can quickly regain his senses.

If the victim is wearing tight clothing, such as a shirt or tie, loosen them as much as possible so that breathing can go more smoothly. Also loosen the abdominal belt and ensure a more or less comfortable position. Gently tilt the head and neck back; this is better for breathing .

To recover, it may be helpful to moisten the forehead with cold water. This can be done, for example, with a damp washcloth . Once the victim has regained consciousness, put it on gently and let him lie in the same position for a while. After all, the victim will need some time to be able to function normally again.

In most cases, the victim will gradually feel better again. Normal activities can often be resumed relatively quickly as if nothing had happened. Just to be sure, check to see if the victim is still experiencing symptoms such as shortness of breath, a general feeling of discomfort, and dizziness . If this does not improve, a serious condition can be the basis of fainting . In that case, seek the advice of a doctor.

previousHow To Control Your Temper
nextHow To Get Rid of Lice Completely
error: Content is protected !!